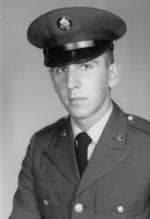 Paul was born in Brooklyn, NY on May 24, 1947, and is survived by his wife of 40 years Barbara, his daughter Kristen, his son Brett, his grandchildren Aisylnn, Kayla, Hunter, and Addison, his mother-in-law Mildred Cicchitti and his dog Jessie.

He was originally from Long Island, NY where he spend 38 years of his life before moving to Cary, NC and then to Wilmington in 2001.
Paul was a proud American hero, serving as a SGT in the US Army from 1967-1970 where he was assigned to Radio Research with the 25th Infantry. During his 2 voluntary tours in Vietnam, Paul was awarded the Bronze Star for his strength and resolve in leading his troops to victory against armed enemy combatants.
After Vietnam, Paul started a successful construction business on Long Island that in its 20+ years, continually set the standard in both quality of craftsmanship, and honesty among his associates and clients. His dedication to his craft inspired his peers to nickname him ‘The Colonel.’

As Paul was an avid dog lover, in lieu of flowers or gifts, Paul has requested that donations be passed on to the “Pawing it Forward” movement, an effort created in his honor for Wilmington Animal Healthcare’s mission to provide for rescued dogs in need of medical care and a deserving home.
Please send memorials to Wilmington Animal Health Care, 6801 Gordon Road, Wilmington, NC 28411. Be sure to indicate that your memorial is in memory of Paul Karpowicz – Pawing It Forward Movement.