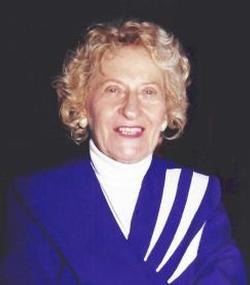 Pearl Horne Wynne, age 89, of Wilmington, N.C. went to be with the Lord on Wednesday, April 30, 2014 at Lower Cape Fear Hospice & LifeCareCenter.

She was born October 12, 1924 in Wilmington the daughter of the late W.C and Minnie Ashley Horne. She was married to the late John G. Wynne of Ransomville, N.C.

Pearl was a long time member of Calvary Baptist Church here in Wilmington where she taught 5th grade boys Sunday school class and sang in the choir. She also helped her husband John in performing his deacon ministry.

One of her greatest ministries was serving her family, she was fond of saying that “charity starts at home.” Perhaps the thing that many did not realize was her role as a “silent servant.” She was always giving and doing for others that were in need, or desired an encouraging word. Her many acts of kindness went unnoticed by most because she never wanted or needed the accolades or recognition of others knowing that her heavenly Father would reward her in due time.

She acquired a great interest in learning about natural foods, vitamins and minerals while working at a local health food store. This interest followed her for the rest of her life and apparently sparked an interest in her son who is now a chiropractor and a granddaughter who has a passion for whole foods. Hillary is also a children’s pastor at the Kingdom Builders church in Wallace, N.C. John Wynne her grandson is currently serving his country in the National Guard. Nana was very proud of her grandchildren.

She was a loving wife, mother, granddaughter, sister and friend.

A Memorial Service and a celebration of her life will be held 7:00 PM Tuesday, May 6, 2014 at  Southside Baptist Church, 3320 South College Road. The Reverend Kelly Stanley will preside over the service. The family will see friends following the service.

In lieu of flowers please give a donation to the ”Memorial Fund” at Southside Baptist Church in the name of Pearl Wynne.