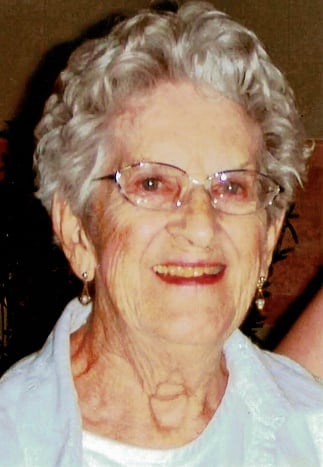 Priscilla (Pearce) Hansberry, age 97, passed away on Thanksgiving. She was born on June 7, 1921 to Harold Byron Pearce and Inez Evelyn (Smith) Pearce. She spent almost her entire life in Attleboro MA.

She married William (Bill) Hansberry in 1942. Bill passed away in 2005. She worked at the Pentagon for awhile during World War II and had a career as a bookkeeper in the jewelry industry in Attleboro. Bill and Priscilla retired to Harbor Heights, Florida in 1984, They lived there until 2004 when their home was destroyed by Hurricane Charlie which prompted them to move to Wilmington, NC to be closer to family.

Priscilla was a very caring woman and lived a full and happy life. She is survived by her four children: William (Bill) Hansberry, Jr. of Reedsport OR., Craig Hansberry of Tallahassee, FL., Scott Hansberry and wife, Debbie, of Wilmington, NC., and Judy (Hansberry) Vrooman and husband, Kim, of Rockaway, NJ. She is also survived by six grandchildren and eight great grandchildren.

Priscilla did not want a service so none is planned. If so inclined, a donation in her memory to the Lower Cape Fear Hospice Foundation at TMCfunding would be appreciated.