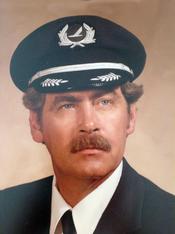 Ray was born on December 11, 1938 in Winston-Salem, N.C. to Dura Mae and Raymond M. Tysinger, Sr. He was a graduate of Wingate College with an Associate degree in Engineering. During college he played stand up bass in a band he helped form, ‘The Stardusters’. He attended Virginia Polytechnic Institute and while earning his Bachelor of Science degree, was drafted into the military in 1961. While stationed in Okinawa, Japan, Ray earned his black belt in Judo and Aikido. He served in the United States Air Force from 1961-1965, receiving his Honorable Discharge as a Senior Airman First Class, serving as a reservist until 1968.

Ray was employed as a pilot for Piedmont Airlines and US Air for thirty years, retiring as a Captain in 1995. He was a member of the Silver Eagles and the Quiet Birdmen. He was also a Deputy United States Marshal, serving the Middle District of North Carolina from 1975-1984.

The family will receive friends to celebrate his life at Wilmington Funeral Chapel on Saturday, September 7, 2013 from 3-5 p.m.

In lieu of flowers, the family requests that donations be made to Lower Cape Fear Hospice, 1414 Physicians Drive, Wilmington 28401.

Please share memories and condolences with the Tysinger family by clicking on the guest book tab above.