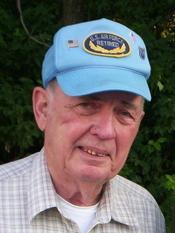 On the morning of October 10th, 2011 Raymond Rufus Royer, age 84, passed away at New Hanover Regional Medical Center in Wilmington, NC after a 6 year struggle with Dementia.

Ray Royer was born on October 27th, 1926, in Womelsdorf, PA, and a longtime resident of Harrisburg, Pa. He served as both a Navy Frogman with UDT 19 in World War II and with the Air Force during the Korean War, later retiring after 20 years of honorable service. He continued to serve the government as a civilian for many years, in addition to retiring from Ralston Purina.

Raymond is survived by his son Major Lou H Royer, USMC, wife Angel and two granddaughters Winter & Trinity; in addition to his two sisters Elizabeth Childers & Mildred Lesher of Oklahoma City, Ok & their extended family. Raymond was preceded in death by his wife of 36 years, Hang N Royer who passed away March 20th, 2005.
In accordance with his final wishes, an interment ceremony for close friends and family will be held later this month in honor of veteran Raymond Rufus Royer at Indiantown Gap National Cemetery in Annville, PA.

The family thanks you for your thoughts and prayers, asking that in lieu of flowers a contribution be made in memory of Raymond Rufus Royer to Alzheimer’s Foundation of America (www.alzfdn.org).