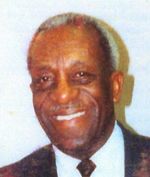 Robert attended Dillard High School in Goldsboro, N.C. where he graduated at the tender age of 15 years old. He immediately joined his two older brothers at Benedict College in Columbia S.C. where he went on to study science and religion. His college education was briefly interrupted by a call to duty to serve his country in the United States Navy. He returned to Benedict College to finish his education graduating in 1947. During his last year at Benedict he met his soul mate Katherine L. Osborne who he married on March 29, 1948.

After graduating from college he and his new wife Katherine moved to Newark, N.J. to join the rest of his extended family to start a new life. Robert’s deep faith and spiritual growth began under his father the Reverend B. F. Johnson, former pastor of Metropolitan Baptist Church in Newark, N.J. where he received his calling to preach and serve the Lord. He was ordained a Baptist minister on July 8, 1966 and continued to serve under his father.

His thirst for knowledge lead him to further his education at Columbia University, Seton Hall University and Kean College where he earned a Masters Degree in Education. Robert began his teaching career in Newark, N.J. at Montgomery Street School, creating employment programs for teenagers with special needs. In 1968, Robert’s calling for community service began when he was the 1st African American elected to the board of education in Springfield, N.J. were he resided with his family for 45 years.

Robert was called to pastor Hopewell Baptist Church in 1970 where he served until 2006 creating many programs that served the people of greater Newark, N.J. He also served as a member of the Black Churchman Association of New Jersey, and on the foreign mission board of the National Baptist Convention with his father. In 1970 he joined the Springfield Rotary Club where he later became a Paul Harris Fellow, the highest honor given to a Rotarian for service in the community. In 1985 he was appointed by Governor Kean to serve as a commissioner on the Public Employment Relations Committee and in 1987 Governor Dean appointed him to serve on the board of trustees at the University of Medicine and Dentistry where he served until 1991. Robert also served as president of the Metropolitan Ecumenical Ministries, and was one of the original founders of the Metropolitan United Ministries Development Corporation with Reverend Teabout and Reverend Reagan, where they built affordable housing in the Newark community. In 2006 Robert decided with a heavy heart to retire from the ministries after serving as pastor of First Hopewell for 36 years. He and his wife moved to Wilmington, N.C. until the Lord called him home on March 9, 2008.