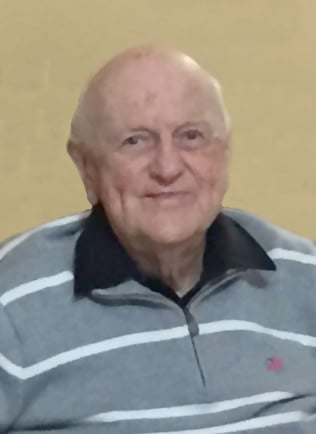 Richard was born on August 31st, 1925 in Buffalo, NY. He was the youngest of six children born to Adam and Benedykta Stevens.

In 1943, at the age of 17 Richard started working in the advertising department at Sattler’s Inc. in Buffalo, NY. During his 40 years with the company, he held the positions of Runner, Advertising Assistant Manager, Advertising Manager, Advertising and Sales Promotion Director, and Senior Vice President of Marketing. At the age of 58 Richard began his own advertising agency and his ads could be seen around the globe. Richard also served as panelist and lecturer at numerous workshops and seminars at University of Buffalo, State University of New York (SUNY), and Canisius College.

Richard met the love of his life Dolores V. Stevens while at Sattler’s. They were married in 1949 and celebrated 69 memory filled years of marriage the year that Dolores passed away in 2018.
At the age of 89 Richard finally retired with Dolores to Wilmington, NC to be close to their family.

Richard is survived by his daughter Cheryl Schmitter, son-in-law David Schmitter, granddaughter Crystal Burns and husband David, grandson Steven Schmitter and wife Courtney, and great-granddaughters Brooklyn Grace Burns and Madelyn Harper Schmitter. Dad, grandpa, G.P. (as the great-granddaughters called him) was always quick to make you laugh and smile. He was an old fashion gentleman. Visitors to the house always left seeing him on the front porch waving goodbye. Now he is waving from heaven.

A Funeral Mass will be held at 12 noon on Friday, March 4, 2022 at St. Therese Catholic Church Wrightsville Beach. A reception will follow the mass in the Parish Hall.

The family asks in lieu of flowers that a donation be made to Lower Cape Fear Lifecare Center in Wilmington, NC or your local animal shelter.