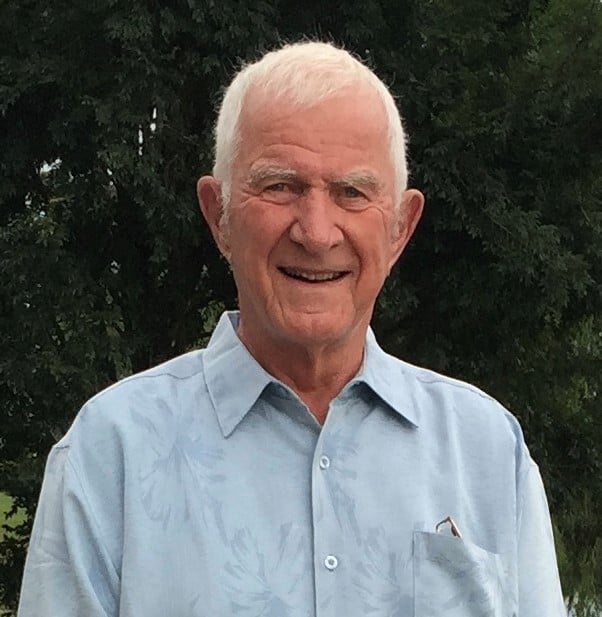 Richard died peacefully while in the care of Community Hospice and Trinity Grove skilled nursing facility after a long battle with Alzheimer’s disease. A special thanks goes to Community Hospice, Trinity Grove of Wilmington and Terra Bella of Southport for providing Richard with excellent care while lovingly allowing him to maintain as much independence and dignity as possible.

Richard is preceded in death by his parents, Ada Stimer Ellis, Clarence Ellis, his informally adopted father, and his father Alfred Campbell, as well as his brother Thomas Campbell, and his daughter Joy Lynn Carroll (Curt). Richard is survived by his loving wife of 25 years, Mary, his 2 children – Rick (and his wife Becky) and Vicki (and her husband Tommy), his 5 grandchildren – Kassidy (husband Sean), Scott (wife Cathy), Bradley, Alexander, and Desmond (wife Courtney), 6 great-grandchildren – Ayden, Heather, Blair, Victoria, Owen, and Ava. He would also want to mention his siblings-in-law and his many nieces, nephews, great nieces, and great nephews.

Born in Ann Arbor, Michigan, Richard spent his early childhood in Hadley, Michigan, before the family settled in Waterford, Michigan. Having worked from a very early age, he was very proud of his last 2 high school summers, first when he hitchhiked to Traverse City to join the migrant workers in picking cherries and in the second summer hitchhiking from Michigan to Alaska to work the gold dredge for Alaska Smelt and Mining Company. On his return, he married his high school sweetheart (Patrisa).

Following his marriage to Patrisa, Richard spent the next 3 years living in Detroit and working as a Detroit police officer and then as a private investigator while he attended Wayne State Law School. After passing the Michigan bar, Richard and his family moved back to Waterford, and he “hung up his shingle” (opened his own practice.) He remained a prominent, well-regarded attorney in Oakland County for the next 33 years.

In 1978, while still practicing law, Richard opened a restaurant in Waterford called The Club Players, which was later remodeled and re-named The Duck Blind. For the next several years, his restaurant became a haven for family and friends to gather, tell stories, forge relationships, and often be invited to join the party at the “owner’s table”. He always said owning the restaurant was like having friends over every night, sitting around the living room, and telling stories.

Despite running two businesses, Richard always had a lust for more in his life. He was an airplane pilot and loved to take friends and family on trips in his Mooney Chaparral airplane around Michigan and along the east coast. He was also an avid skier, sailor, golfer, traveler, and life-long learner. He made time for several sabbaticals, including a year-long motor-home trip across the US and Mexico, a year skiing in Vail, Colorado, and with wife Mary, he spent 3 years in Whistler, British Columbia, 2 years sailing in the Caribbean, and 3 years sailing Lake Huron and the full lengths of the Erie Canal and the Intracoastal Waterway. They have also traveled to many countries around the world and to several US National Parks.

Richard also had a side passion for real estate and throughout the years, he built or renovated many homes, office buildings and multi-unit condos. In Michigan, he was very active in local politics, running several campaigns for electorates but always refusing to run himself because he “didn’t want to be that tied down.”

In 2000, Richard retired and moved with Mary to the Magnolia Greens golf community in Leland, NC to be closer to the ocean and enjoy a year-round temperate climate. Knowing he needed to keep busy, they purchased a 3-unit complex on Oak Island that he spent the next 5 years renovating from the ground up. They also joined the “Couples Golf Group”, the “Winey Diners”, became members of the Wilson Center and the fine arts community, and took many road trips exploring the “things to do” in the North Carolina coastal region. Richard immediately made many new and lasting friendships; but, always maintained the old friendships as well.

He was a man that was always available for family and friends as a counselor, a mentor, a protector, a companion, and a friend. He truly brought out the best in people. He knew how to inspire and motivate people and exuded a confidence that made them believe in themselves. He made himself available to everyone with his wealth of knowledge on almost any subject.

He loved children of all ages and always included them in his life’s adventures, whether it was boating on Williams Lake, skiing at Boyne Mountain, going to festivals or concerts, trying new restaurants, taking a road trip, skiing out west, sailing the Great Lakes or the Chesapeake, or golfing. He loved to teach children how to do things and give them an appreciation for new experiences. And he always found the good in others regardless of their position or status.

Richard was highly regarded as a man of integrity, compassion, intelligence, and reliability. He was incredibly well-loved and will be missed terribly.

The family will receive guests at a Celebration of Life at the Magnolia Greens Golf Plantation Clubhouse, 1800 Tommy Jacobs Dr. Leland, NC 28451, on Friday, August 19, 2022 at 11:00 AM. There will be a short service, followed by a continental brunch and gathering. Richard’s Celebration of Life may be viewed here.

For those who wish to make a charitable donation in his memory, the family asks that you consider the Alzheimer’s Association (www.alz.org).

Please share memories and condolences with the family at the Tribute Wall  tab below.