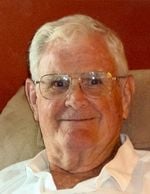 Richard Boyd Jones, 81, of Hampstead, NC died peacefully at his home on May 3, 2008 after a recent illness.

He was born in Aldan, PA, on February 22, 1927, the son of the late John Walter Jones, Jr. and Edith Boyd Jones and was preceded in death by his wife of 41 years, Susan Alsop Jones.

Dick was a veteran of the U.S. Navy, serving from 1945-1946 as a radar specialist. He was a salesman for the foundry and specialty advertising industries and a devoted member of the Hampstead Lion’s Club for 19 years. He was an avid golfer, bowler, and boatsman and his family and friends will remember him for his humor, love of children, and gravity-defying hugs.

A memorial service will be held on Saturday, May 17, at 2:00 p.m. at Topsail Presbyterian Church.