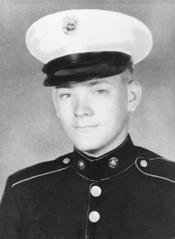 He was born on February 19, 1936 to the late Clyde and Isabelle Lucas. He was preceded in death by two grandchildren, Katherine Rhea Flowers and James Richard Hewett and by a son-in-law, Tim Son.

Richard was a proud veteran of the US Marine Corps serving for over 6 years. He was a talented welder and fabricator, and operated Murrayville Enterprises and later Minuteman Maintenance Services before his retirement.

A graveside funeral service will be conducted 2 PM Monday, October 15, 2012 at Greenlawn Memorial Park officiated by Rev. Sam Hill. His grandsons and grand sons-in-law will serve as pallbearers.
The family will be at the home of his daughter Phyliss, 7022 Murrayville Rd., Wilmington.