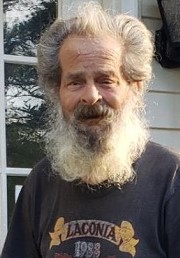 Richard “Wink” Bricault 74, of Hampstead died Tuesday at his home with family at his side.

Wink was born in Worcester County, MA. the son of the late Ovila and Alice Delisle Bricault. He was a retired Auto Body Mechanic. Also preceding him in death was brothers Paul and George Bricault and a sister Lorraine Bricault.

At his request no formal service will be held. His cremains will be placed in the family cemetery plot at a later date.