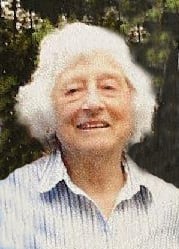 Rita Estelle Ackert was born in 1927 on the 20th of July, completing the family of John and Kate Ehrenzweig, and older sister Jean, in Bronx, NY.

Rita was a lifelong athlete beginning in her grade school years…. sliding across large sections of icy sidewalk on her way to school, and jumping off billboard scaffolding on her way home. Jean would always stand by watching, thinking of the probable parental reprimands. Rita quickly progressed to a lettered starting player on her high school basketball team, became an avid tennis team member, and ran track (trained by her father who refused to run with her once she was able to beat him).

Later in life, Rita became an accomplished skier and continued to hone her tennis skills when she met and fell in love with her future husband, Philip. They enjoyed those two activities side-by-side throughout their lives. Their love of skiing passing to their daughters so that all four could enjoy the thrill of coming down a snowy mountain, or as they would say, “shushing down the slopes”. Rita and Phil were such a graceful pair, you could pick them both out from the bottom of the mountain. They were a joy to watch, especially as they showed off by dancing the Lindy Hop on their skis. Rita’s athleticism knew no bounds and she excelled at waterskiing as well. It delighted her future life partner to learn that they shared another common interest to enjoy together on the shores of Lake Champlain in VT.

As well as enjoying sports and outdoors, Rita had a fine artistic sensibility. She was an art student at Pratt Institute in NYC until she married. Later in life she was a collector of fine antiques. Rita put her artistic talents to work at McCall’s Magazine in the Mid Town PanAm Building working in their art department until the birth of her first daughter. Rita was a New Yorker through and through, although they moved from Manhattan in the late 60’s and never returned to the city unless to visit. Rita was a loyal and lifelong friend to Marilyn Sylvester, her partner in intrigue and adventure. Together the two high school friends travelled many places around the world and Rita brought back treasures she cherished and displayed as reminders that her free and adventurous spirit never disappeared.

Rita and Phil leave two daughters, Alison & Lauren, who they raised together in various New England states. The last being Massachusetts before retiring from their employment agency, Laur-Al, Inc., which they built, owned and ran together day-to-day for over a decade. Their teamwork, dedication and strong work ethic built a successful agency specializing in construction and helping with the revitalization and regrowth of Worcester, Massachusetts. Rita’s comfort level and knowledge of construction stemmed from the many long weekends spent with her father building her parents’ home in Peeksville, NY on the Hudson. Keeping Laur-Al as a true family business, a late night call to a nearby daughter might be made to fill a last minute AM job site order. Rita made it known in no uncertain terms, she could fill in as needed as well!

Throughout the moves and transitions, as Rita and Phil’s small family grew, a shared family home on Lake Champlain in Vermont was always a place of respite, rejuvenation and a coming together of grandchildren and extended family. Rita’s two grandchildren, Alexandra and Lyn, recently graduated from college and are well on their future paths in the world. Rita’s daughters miss her already, but she leaves them both with her undaunted spirit that stayed strong through adversity, and a reminder that above all, it is simple humor and striving to be the best you can be that gets you through life. We are so fortunate to have had a role model in Rita, one who was loyal, loving and genuine to the end. Mom.