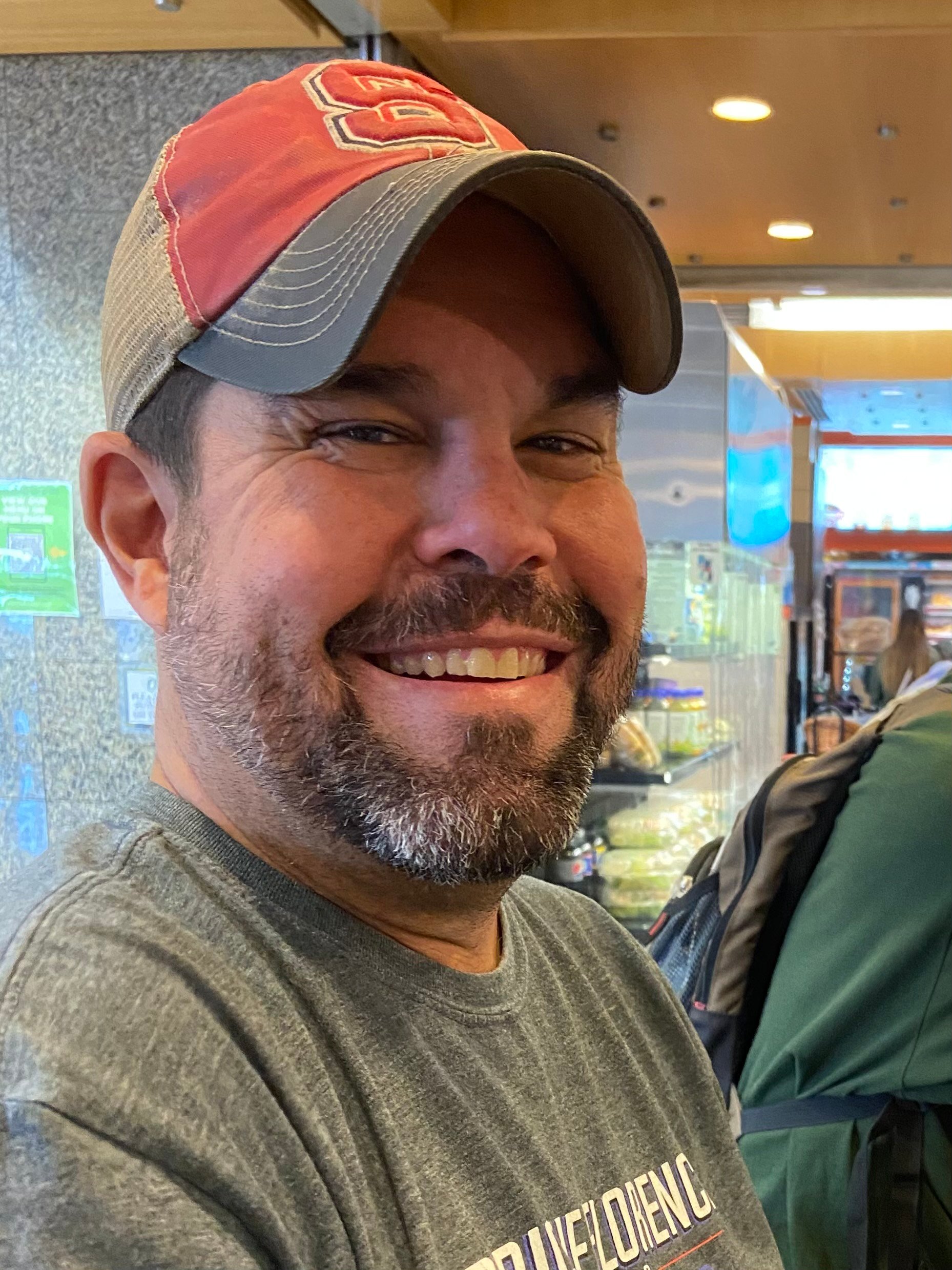 Robert Dawson Rhoad, Jr. of Wilmington, NC passed away Sunday, November 21, 2021, after 49 years of smart ass comments, playing loud music, scowling at cameras, taking selfies, talking about his Jeep, and providing wonderful memories to those around him and generally enriching their lives. Dawson (or Daswon to some) was born with a grumpy look on his face in Raleigh, North Carolina, on April 2, 1972, to the late Virginia Duvall Mann and the late Robert Dawson Rhoad, Sr. He and his younger brother Matt were raised in Clemmons, North Carolina, by their single father, Bob, whom Dawson loved to “serenade” by practicing with his high school rock band in the garage under his bedroom. When not deafening his father by playing drums underneath him in the band, Dawson took flying lessons (soloing, but he may have mentioned once or twice that they lost his shirt tail), played soccer as a goalie, ran track, and played trumpet, mellophone, and drums in his high school and college pep and marching bands. He graduated with a Bachelor of Arts in Political Science from North Carolina State University in 1994, and thereafter griped and complained about politics for the next 27 years.

Dawson was very proud of his 26.5-year career with the North Carolina Department of Public Safety where he rose to the level of Assistant Judicial District Manager in Community Corrections (even if the State says it was only a 26-year career, Dawson knew the truth). He loved public service and the dedicated people he worked with every day to serve his community.

As an adult, Dawson enjoyed watching (and swearing at) Wolfpack and Carolina Panthers games, crushing his girlfriend Candice Devinney in the History and WWII categories in Jeopardy!, and cooking for friends and family from the many recipes handed down from his grandmother or printed from the internet and collected in a neatly organized binder (the only neatly organized thing he owned). By far, though, his favorite things to do were talk about his Jeep, look at his Jeep, work on his Jeep, fantasize about his Jeep, drive his Jeep, buy new gear for his Jeep, and ponder new ways to enjoy his Jeep. These were usually done with his best friend John Corwin and other members of the Salty Crawlers, a Jeep-owners club he helped found, typically on Carolina Beach’s “North End”, Freeman Park, or on the “South End”, Fort Fisher, where they cooked out, enjoyed refreshing beverages, camped, talked about Jeeps, took pictures of their Jeeps, rearranged their Jeeps’ tires atop each other, discussed Jeep modifications, and, very occasionally, got into the water. Dawson also loved taking trips with the Saltys to Uwharrie National Forest where they spent their days crawling their convoy up through the park’s most difficult off-road trails and ended their nights around a campfire.

The biggest source of pride, love, and joy in Dawson’s life, however, was his children, Mason and Laney. The only thing he talked about more than his Jeep was how proud he was of them, how much he loved them, and how smart and funny they are. He enjoyed their many trips to the beach together with friends every weekend and taking them on trips to the aquarium and waterparks. He lived for dinner and movie nights with Laney and made sure to instill a love of classic and hard rock music in Mason, where they connected on a shared appreciation of bands that the rest of their family has never even heard of.

Dawson’s quick wit, sarcasm, wide smile, ability to complain about literally anything, expressive eyebrows, dramatic sighs, generosity, deep booming laugh, creative and constant cursing, grumpy scowls, and love will be sorely missed by all who knew him. Contrary to popular misconception, Dawson will not be taking his NC State chair with him (although it is HIS CHAIR and nobody can have it).

Dawson is survived by his children, Mason Patrick Rhoad (17) and Alayna “Laney” Shannon Rhoad (15), both of Wilmington, NC; his brother and sister-in-law, Matthew Rhoad and Holly Eckhardt, his nieces Rachel Rhoad, Caroline Rhoad, and Olivia Eckhardt, and nephew Carter Rhoad, all of Raleigh, NC; his Jeep, Cookie Monster (11), of Wilmington, NC; and his omnipresent NC State hat (age unknown, but many years past what should have been its natural lifespan) of Wilmington, NC.

Dawson’s only expressed wish upon his passing was to find a place to dig a hole big enough to be buried in his Jeep. Unfortunately, no cemeteries in Wilmington will accommodate such a request (at least, not on a state employee’s budget). Instead, a visitation for family and friends will be held on Saturday, December 4, 2021 from 2:00 PM to 4:00 PM at Wilmington Funeral & Cremation, 1535 S. 41st St., Wilmington, NC 28403 (910) 791-9099. His family requests that attendees dress casually in NC State gear or NC State red, which Dawson would have loved (especially knowing that his UNC and Duke friends will, just this once, have to grit their teeth and don the bright red of his beloved Wolfpack in his honor) and curse creatively on the drive over at all the people in Wilmington that don’t know how to drive.

Immediately following the viewing, all are welcome to join together at one of Dawson’s favorite places, Lazy Pirate Island Sports Grill, 701 N. Lake Park Blvd., Carolina Beach, NC, 28428, for an informal remembrance and celebration of Dawson’s life. His ashes will be scattered at the North End by his family at a future date.

In lieu of flowers (deemed a waste of money by Dawson), strike up a conversation with a random stranger at a bar, grocery store, or in line at the bank. Or, even better, donations may be made in his memory to Toys for Tots, an organization Dawson was proud to support each year. Link is listed below under the donate tab.