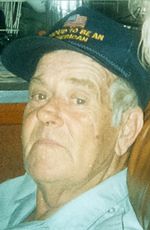 He was born in Duplin County to Lela Hall Simmons and Zolly James Simmons. Robert had nine brothers and sisters, all deceased. He was in service during the Korean War. When he came out of service, he married Mattie Bray Hardison. They went to Philadelphia where Robert went to the Philadelphia Electronics Institute. After he graduated, he came back home and they had their three girls, Ava, Donna, Lisa, and a granddaughter, Melisa that they reared. They have five grandchildren and six great grandchildren.
When Robert could no longer repair TV’s, he gardened and raised watermelons which he hauled to other people. He loved people. He loved fishing, too.
Robert was sick for several years. He is gone but not forgotten.
A memorial service will be held at Wrightsboro Baptist Church at 11 a.m. May 8, 2008. Visitation will be at 10 a.m., one hour prior to the memorial service.
In lieu of flowers, donations may be made to the Wrightsboro Baptist Church building fund.