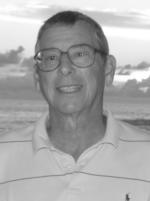 Robert Jay Rusnak Sr. passed away November 21st, 2010, at home surrounded by his wife and children, after a long negotiation with leukemia.

He is deeply missed by his greatly loved wife and friend of 46 years, Martha Rusnak; his son, Jay Rusnak (Kelly Taylor); his daughter, Jennifer Keane (Kevin); and his grandsons, Arron and Jesse Keane. He is also survived by two brothers, Earl Rusnak and Kenneth Rusnak, as well as many dear cousins, nieces, and nephews.

Robert (Bob) was born September 15th, 1936, in Chicago, IL to Earl and Helen Rusnak. Bob was a graduate of Evanston Township High School in 1954, Yale University in 1958, and received his Ph.D. in American History from the University of California in 1973. He was a professor of history at Dominican University in River Forest, IL, where he chaired the History Department for many years. Bob and Martha retired to Wilmington, NC in 2000 where he remained active in the community serving as Vice-President of the Board of the Big Dawg Theater Company, as well as on the Homeowners’ Association of Eastwood Village. Bob enjoyed golf, the Cubs, fine food and good conversation, the beach, travel, and spending time with family and friends both here in Wilmington and various other locales.

Bob and Martha shared a very special marriage of much joy and love. He was a loving and active father who took pride in teaching and nurturing his children as well as extending his interest, concern, and compassion to a wide assortment of other friends and relatives. Bob also demonstrated the uncommon quality of genuine friendliness and openness to all he encountered. We will celebrate his life and miss him dearly.

A celebration of Bob’s life is planned for a time to be announced at a later date.

It was his wish that any expression of sympathy be in the form of a donation to the Leukemia and Lymphoma Society.