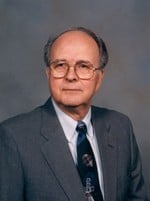 Robert L. Lea Jr. of 213 Groves Point Circle, Hampstead, NC, went home to be with his Lord and Savior on Sept. 26th, 2009. He left this earthly life peacefully surrounded by the very love that exemplified his 84 years. Bob was born on Feb. 23, 1925 in Gladys, VA. To the late Robert L. Lea and Grace Ester Moore Lea. Robert is survived by his wife Charley (Tillie) Cooper Lea. Upon graduation from Appomattox High School in 1943, he enlisted in the U.S. Navy. He proudly served his country aboard the USS Quincy, from the Normandy invasion to the Peace Treaty signing in Tokyo Bay in 1945 at the end of World War II. His ship the USS Quincy was very active during the war. He was a member of the Fathers Heart Fellowship in Hampstead, NC. Bob was a devoted Christian who inspired others with his gifts of leaderships and service unto others. His life was focused upon his family and his Lord Jesus Christ. A perfect Scripture to describe him is, He cared for them with a true heart and led them with skill fast hands Psalm 78:72. He will be surely missed by all who knew and loved him.

In addition to his parents he is predeceased by one Infant Daughter, Grace Elizabeth Lea, two Sisters Alice Lea Squires and Anne Lea Steinbery, one Brother Frank Lea.