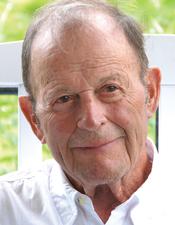 He was born on January 29, 1921 in Marshall, VA, the son of the late Rev. Turner Ashby and Talmah Weikel Graves. He spent elementary school and high school years in Salem, Virginia, where his father was the director of the Lutheran Children’s Home.

Preston “Poppy” Graves graduated from the military corps at Virginia Polytechnic Institute. He was a guard on VPI’s football team. After graduation, he worked briefly at Bethlehem Steel until he was old enough to be commissioned as an officer in the US Army Corps of Engineers. He was the operations officer of the 46th Engineer Battalion building airfields in the Pacific during WWII. He was awarded a Bronze Star with a V for his valor in keeping the Leyte airfield open in the face of “repeated enemy bombing and strafing attacks”. He served in the Vietnam War in charge of inspecting and accepting all U.S. construction projects, especially roads.

While stationed at Ft. Belvoir, VA, in the early sixties, he was commandant of the Army Nuclear Power Plant operator training facility, and later was deputy commander of the army’s mapping research organization, GIMRADA, which conducted early research on the use of satellite mapping data. Next, he commanded a battalion mapping North Africa from Liberia to Ethiopia. Earlier, he built a military base near the Russian border in Iran. In the late sixties, he served at NATO headquarters near Brussels, Belgium. He retired from the Army in 1972 with the rank of full Colonel, Regular Army. He was a graduate of the NATO Defense College, the Army Command and General Staff College, and completed courses at these universities: Purdue, Michigan, and Virginia.

During his army career he and his family lived in Germany, Italy, Libya, and Belgium and in Virginia, Michigan, Kansas, Kentucky, and Alabama.

After his military retirement, Preston and his wife Alma moved to the campus of Woodberry Forest School, near Orange, Virginia, where Preston joined the faculty as a math teacher. They lived on the school campus for more than 20 years until Preston retired from teaching, and then relocated to Wilmington, N.C. in 1993.

Preston was an avid golfer and served as a course manager at Woodberry Forest School and as a course ranger at Landfall in Wilmington. He was an active gardener until the age of 90 and delivered fresh vegetables to his neighbors via golf cart.Preston was honored with the first StarNews Good Neighbor Award.

Preston’s years in Wilmington were enriched by his loving Renovah Circle neighbors and by the congregation of Saint Paul’s Evangelical Lutheran Church, and his pastors Rev. John Misenheimer and Rev. Mark Opgrand.

Memorial Services will be held at Saint Paul’s Evangelical Lutheran Church on Saturday Sept. 15 at 11 am with internment at Hebron Lutheran Church near Madison, VA at a later date.

In lieu of flowers, a donation to the Lower Cape Fear Hospice (1406 Physicians Drive, Wilmington, NC 28401) would be appreciated.