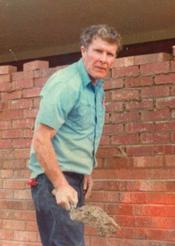 Robert Sutton “Bob” Craddock of Wilmington, passed away at his home on Tuesday, March 6, 2012

He was born November 2, 1925 in Crystal Block, West Virginia to George and Sadie Craddock.

Losing his father George at the young age of 18 months, Bob was raised with his brothers and sisters by his mother, who instilled in him a determination and a code of decency that allowed him to touch many lives in later years. From his youth on, Bob always strove to work hard and provide for those he loved. When the US entered World War II, he volunteered for the army at age 17, giving to his country as he served in the Virgin Islands and the Mojave Desert with the same generosity that he gave to his family.

After the war, he undertook a career as a brick mason, eventually forming his own company and building many notable buildings in the Piedmont area and in New Hanover County. Giving was Bob’s nature, and he treated his employees with his trademark goodness. His greatest kindnesses were reserved for his children and his beloved wife of 60 years, Eleanor. Along with his personal achievements, Bob also greatly enjoyed sports, antique cars, coins, and music. Bob Craddock is what is best in men.