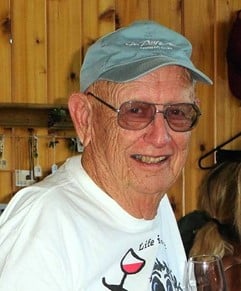 Robert William Sparrow, age 96 of Hampstead, NC, passed away Thursday, October 22, 2020 under Hospice Care at his home at Arbor Landing. He was born in Syracuse, NY on April 1, 1924 to the late Ford Sparrow and Julia Murphy Sparrow. Bob was preceded in death by his wife of 77 years, Doris Elizabeth Sparrow, who passed away on December 31, 2019. Bob is survived by one son, Robert Sparrow, Jr. and wife Susan of St. James, NC; two daughters, Mary Pelchar of Elmira, NY and Patricia Kent and husband Leonard of Killington, VT; sister-in-law Arlene O’Neil of Syracuse, NY; 7 grandchildren, 13 great grandchildren, and 6 great-great grandchildren.

After briefly enrolling at the University of Wisconsin, Bob entered the war effort in 1943 and served in the 84th Bomb Squadron, 47th Bomb Group of the US Army Air Corps as both a radio instructor and mechanic until his honorable discharge in 1946. After the war, Bob and Doris lived in Syracuse, NY where he worked for the Carrier Corporation for 23 years before moving on in 1965 to the Corning Glass Works in Corning, NY. His work at Corning included many years in Wilmington, NC proudly serving as the project manager overseeing numerous expansions and updates of the Corning plant for the manufacturing of fiber optic cable. Bob and Doris both retired in 1986 and moved to Marco Island, FL. He enjoyed spending time with family and friends, boating on Seneca Lake, traveling to Ireland, and playing golf. He also dedicated much time and effort to the U.S. Power Squadron, reaching the position of District Commander in the upstate New York area. But his real love with the Power Squadron was teaching the various celestial navigation courses. In 2012, Doris and Bob became “Halfbacks” when they moved from Marco Island back north to Wrightsville Beach, NC. It was here that they enjoyed time overlooking the island, commenting on how nice the Corning plant looked each time they passed by, and meeting up with old friends. Bob and Doris then moved to Arbor Landing at Hampstead in 2018.

A private memorial service followed by an internment at Woodlawn National Cemetery in Elmira, NY will take place at a later date. The family requests that any memorial donations be made to the Lower Cape Fear Life Care.