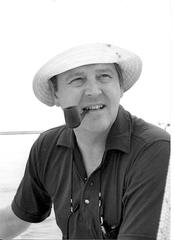 The son of the late Roger Lee and Emma Young Simmons, he was born in Bowling Green, Kentucky on February 25, 1940. After graduating from McCallie School in Chattanooga, Tennessee, he studied electrical engineering at MIT, where he was a member of Sigma Chi fraternity and the MIT golf team. Dr. Simmons received his undergraduate degree from Vanderbilt University in molecular biology. After earning his medical degree at the University of Kentucky School of Medicine, he served as a captain in the Public Health Service’s Heart Disease Control Program applied physiology laboratory at the National Institute of Health in Washington, D.C.

In 1970, Dr. Simmons became the director of program development for the Community Electrocardiographic Interpretative Service in Denver, Colorado, and later the founder and president of MDP, Inc., a medical computing consulting company. He was also a clinical assistant professor of biometrics in the department of Preventive Medicine at the University of Colorado School of Medicine and served as the associate medical director of the Colorado Foundation for Medical Care and its Professional Standards Review Board. Dr. Simmons was instrumental in the development of computer-assisted EKG diagnostic programs and electronic medical records. He presented workshops in cardiac electrophysiology for the American College of Cardiography and at medical school workshops and symposia.

An active community volunteer in Denver and after moving to Wilmington in 1990, Dr. Simmons served as a board member and officer of Family Services of the Lower Cape Fear; as a member and officer of the U.S. Coast Guard Auxiliary, Flotilla 10-06; and as a volunteer computer consultant at Wilmington Health Access for Teens, for which he was honored as W.H.A.T.’s Ten-Year Outstanding Volunteer and a North Carolina “Governor’s Outstanding Volunteer”. He loved sailing and flying, was a ham radio operator and enjoyed building radio-controlled model airplanes and model railroad layouts.

He will be remembered for his sense of humor and warm compassion for others. He was a loving husband, father and grandfather who cared deeply about his family. He is survived by his wife, Dr. Carolyn H. Simmons; two sons: Dr. Clif Simmons and wife Karen, of Wilmington, N.C., and Ric Simmons and wife Angie Lloyd, of Canal Winchester, Ohio; five grandchildren: Parker, Cyrus, Aquila, Zeke and Skylar. Also surviving are a brother-in-law Dr. Arthur House and wife Rita of Simsbury, Connecticut; a sister-in-law Dr. Betsey House and husband Gerald Eubank of Denver, Colorado; five nieces and nephews; and cousins James E. Ashlock (Julie) of Dalton, Georgia; Bobby Jo Hancock (Rodney) and Sam Simmons (Jane) of Jackson, Alabama; and Andrew Cafferky (Suzanne) of Florida.

The family welcomes friends at their home to celebrate and honor his life on Saturday February 19th from 5:00 to 7:00 pm. A private memorial service will be held at a later date. In lieu of flowers, donations may be made in his memory to Lower Cape Fear Hospice, Mercy Corps, or Wilmington Health Access for Teens.