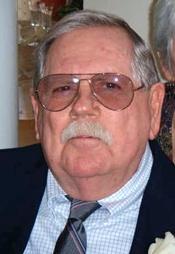 Ronald C. Ray, 76, of Wilmington, died on August 10, 2013 at Lower Cape Fear Hospice Center after a courageous struggle with cancer.

Mr. Ray was born in Essex, Missouri on September 14, 1936, and was the son of the late Cloe and Eileen Estes Ray.
The family moved to El Cajon, California in 1943, where Ron spent most of his childhood, and upon graduation from Grossmont High School, joined the US Air Force, serving from 1954-1974.
He met his wife of 56 years, Mary Aldous, in Bournemouth, England. The family lived in England, Arizona, Florida and Goldsboro NC (with postings in South Korea and Turkey without the family) before settling in Wilmington, where Ron worked another 20 years at General Electric as a machinist.
Ron was a serious car enthusiast and could talk at length on most any car subject, particularly Shelby Mustangs. His other passions included Celtic music, barbeque, baseball, and Civil War history. After his retirement, happy times for Ron were weekly breakfasts, Civil War reenactments, and musical venues with his friends.

The family will receive friends at the residence from Noon til 2pm on Tuesday, August 13th.

In lieu of flowers, the family requests that memorial donations be made to The Nature Conservancy.

The family would like to thank the staff and volunteers of Lower Cape Fear Hospice.