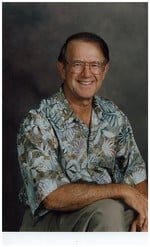 Ronald Phillips, a hard-working man who built an impressive, 32-year career as a civil servant for the Army, but who was even more revered among his family and friends for his countless acts of grace, kindness and humility, died on Oct. 23 at a hospice in Wilmington. The cause of death was renal disease. He was 71 and had lived in recent years in Southport, the place where he and his wife, Barbara Krankoski, had chosen to retire.

In his professional life, Mr. Phillips ardently climbed the Army’s ladder, building a long and successful career in business- and personnel-management. He started as a 24-year-old clerk and typist at an Army retirement home in Washington, D.C. It was 1962 then, and he’d just finished serving in the Navy as a Stars and Stripes reporter in Morocco. Thirty-two years later, when he retired from the Department of the Army, Mr. Phillips was the deputy director of personnel and community activities at a major military base in Maryland, Aberdeen Proving Ground. In that post, Mr. Phillips was responsible for directing some 450 Aberdeen employees.

Still, he may have left an even greater mark in his personal life, say his friends and family.

A man of quiet dignity, Mr. Phillips seemed to handle the ups and downs of his everyday life with both patience and an easy smile, never letting the gravity of a moment overtake the core of his generous spirit. He was cherished as a father, brother, husband and confidant who could steady the ship with his calm, affable ways . . . and who was always ready to lend a hand.

“Ron was never-endingly willing to help you with something,” said his step-son, Barth Grant, a professor of molecular biology at Rutgers University, who spoke about his late step-father in a phone interview. “He was always quick to smile at everything; and he was quick to welcome people. He had a calming influence.”

Mr. Grant added, “He also didn’t like to just sit around: He kept busy, and he was big on doing things the right way.” And that active lifestyle, Mr. Grant said, helped Mr. Phillips and his wife of 18 years, Mrs. Krankoski, build a vibrant marriage based on companionship and joint activities — from cooking to gardening to tennis.

Said Mrs. Krankoski, “He was right there with you, and he liked to laugh — and he was so agreeable.
He was a responsible man; if he said something, he did it.”

As a father to his one child by birth (from a previous marriage), Dean Wesley Phillips, Mr. Phillips was a caring and proud parent. He coached his son’s little-league baseball teams . . . and he took him on sightseeing adventures across the U.S., visiting more than 30 states in their family car. Later, after Dean was grown, they’d hit the links together and catch up over sun-splashed rounds of golf.

Ronald Dean Phillips was born in 1938 in Bakersville, N.C. Just a year or two later, his parents moved the family to western Maryland, where they lived for the next decade on local farms. In 1951, both of his parents died within six months of each other . . . and not long after, he and his three siblings were sent to live separately in four different homes. Ronald stayed in western Maryland, living on a farm with a foster mother who asked him to work the land. Soon, the teenaged-boy was milking cows, picking string beans, riding tractors. “It was hard labor,” Mrs. Krankoski said.

While living in Arizona from 1974 to 1987, Mr. Phillips also took up Autocross/Solo II car racing, a sport that forces drivers to negotiate tricky, slalom-style courses. In his prized, lemon-yellow Lotus, Mr. Phillips won more than 80 amateur contests . . . sometimes with his son, Dean, sitting right next to him in the passenger seat. Meanwhile, he was also sent by the Army to audit personnel files at military bases in 26 different countries.

After retiring from the Army, he went on to work for six years as a personnel analyst for Fairfax County, Va.

“He was a very kind and good man,” said Mrs. Krankoski recently, recalling how he’d courted her in old-fashioned, romantic ways. And, she said, he had a gentle sense of humor.

“When he asked me to marry him, he did it with one caveat,” she remembered, the tone of her voice lightening. “He proposed sweetly, and then he smiled and said: ‘Of course, I can only give you a 50-year commitment, you know, no more.’ But he was 52 at the time, and so I knew 50 years would work out fine.

“And then we both smiled; and we just laughed and laughed.”

A memorial service will be held on Saturday, November 21, 2009, at 11 a.m. at St. James Plantation (a community development in Southport), in the St. James Chapel. A reception will follow at the home of Bill and Mary Jane Spellman, 3825 Druary Lane in St. James.

In lieu of flowers, the family requests that donations be made to the National Kidney Foundation, 30 East 33rd Street, New York, N.Y. 10016 ( http://www.kidney.org/support/ ). The family would also like to thank the Lower Cape Fear Hospice & LifeCareCenter in Wilmington, where Mr. Phillips spent his final days, peacefully and in comfort. The hospice’s care and support will always be remembered.