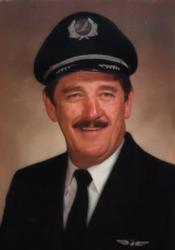 Ronald Wayne Vogler, Sr. “Ronnie” died Saturday, July 30, 2011. He was residing at Northchase Nursing and Rehabilitation Center where he was well cared for by special staff and visitors alike.

He was born July 3, 1935 in Forsyth County in Winston-Salem, NC. He was employed as a Captain at Piedmont Airlines and retired when US Air merged with Piedmont at 54 years of age with 32 wonderful years of employment. He was a member of the Silver Eagles and a QB. Ronald founded the Piedmont Breakfast Club for retired Piedmont Employees in 1989. They met regularly for breakfast at the former Whitey’s Restaurant on Market Street in Wilmington and the retired group still meets every month at the Cracker Barrel. He volunteered extensively at the Ogden Elementary School for many years and won the Governor’s Award during that time for his dedicated work for the school.

He is survived by a son, Ronald Wayne Vogler, Jr. and Wife Linda, of Rocky Point, NC and a daughter Sharon Vogler Galloway of Wilmington. He has a grandson, David Isaac Vogler of Wilmington and two step-grandchildren Joshua R. Edens of Fort Riley, Kansas and Caleb B. Edens of Wilmington. He has one brother, Robert Allen Vogler and his wife Mary Alice of Winston-Salem, NC, and two sisters, Jean Russom and husband Chuck of Clemmons, NC and Jane Morton and husband Ronnie of King, NC. He has a special Goddaughter, Victoria “Tori” Mavrolis of Wilmington, NC.

He was well loved by many, especially for his sense of humor and his grand generosity. He will be greatly missed.

The family will see friends Wednesday, August 3, 2011 from 10 to 11 am at Wilmington Funeral Chapel where funeral services will be at 11 am. Graveside services will be 10 am Thursday at Oaklawn Memorial Park in Winston Salem.

In lieu of flowers donations may be made at Lower Cape Fear Hospice of Wilmington NC or The American Cancer Society.