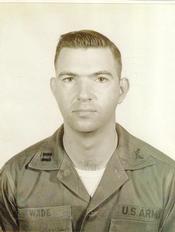 Mr. Wade was born in Essex, Maryland, to the late Addy and Alva Queen Wade. He was of the Pentecostal faith. He proudly served in the United States Army, during which time he served in Germany and Viet Nam, earning two purple hearts along with several other commendations. He was in the Military Police where he reached the rank of Captain. He was in construction following his retirement from the military. He was also an avid NASCAR fan.

Survivors include his loving wife of 34 years, Linda Boyles Wade, of the home; five children, Johnny Wade of Parkton, NC, Randy Boyles of Altoona, PA, Tracie Selwitz of Daytona Beach, FL, Adam Wade of Martinsville, VA, and Matthew Wade, of Lexington, KY; three sisters; two brothers; 14 grandchildren; 3 great grandchildren (with one more on the way); and 1 great great grandchild; Mother-in-law, Vara Boyles of Burgaw; and many other close family and friends who will miss him very much. The family would also like to give many thanks to Pender Memorial Hospital Skilled Nursing Center for the special care given during this difficult time.

There will be a memorial service with full military honors at a later date.

The family has requested that flowers be sent to the Nursing Center in Burgaw.