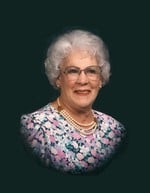 Born April 2, 1914 in New York City, NY she was the daughter of the late Antonio and Rosaria De Leo Riggi. She was a retired sample maker with the George Miller Manufacturing Company in New York. Rose was a Roman Catholic.

In addition to her parents, her first husband, William Clay Rhodes; her second husband, Joseph Anthony Sollecito; two brothers, Jack Riggi and Joseph Riggi; and two sisters, Mary Portera and Vivian Bessci preceded her in death. She was the last surviving member of her immediate family.

Funeral services will be conducted at 11:00 AM, Saturday, December 5, 2009 at the Wilmington Burial & Cremation Service in Wilmington, NC. Family will receive friends from 6:00 -8:00 PM Friday at the funeral home. A private family burial will be in Greenville Memorial Gardens in Greenville, SC.

In lieu of flowers memorial contributions may be made to Lower Cape Fear Hospice, 1414 Physicians Drive, Wilmington, NC 28401