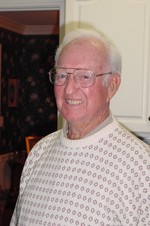 Rossie, as he was affectionately known, was born August 19th, 1924 in Yanceyville NC the only child of Sally Langley Kivett and Ross Melton Kivett Sr.

Ross served in World War II in the 82nd Airborne Division. He was employed for 37 years by Southern Bell in Greensboro NC, retiring in 1983 to Holden Beach NC where he enjoyed fishing, shrimping, boating, collecting oysters and clams and spending time with his loving wife of 62 years, Mildred Childress Kivett.

We would like to thank all the kind people at the Davita Dialysis Center in Shallotte and at the Lower Cape Fear Hospice LifeCareCenter.