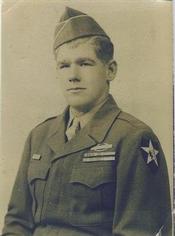 Born to Andreas and Sophia Arntsen on August 15, 1924 in Brooklyn, New York, he had been a resident of Wilmington for fifty years.

Roy proudly served from 1943 to 1946 in the G Company 86th Regiment of the 10th Mountain Division of the U.S. Army. His wartime experiences, particularly at the Battle of Riva Ridge in Italy, changed him forever and left him with relationships that lasted a lifetime. Among many other awards and recognition, he was awarded the Bronze Star Medal.

Upon his honorable discharge, he began his civilian career working at the Brooklyn Army Base. In 1955, he moved with his family to Southport NC where he was asked to assist in the logistics of setting up the new installation of Sunny Point Army Terminal.

Always a man to stand firm to his beliefs regardless of others’ opinions, it was a point of pride for him that he played a critical role in the integration of Dosher Memorial Hospital in Southport.

Affectionately known to many as ” The Jolly Green Giant” because of his wonderful sense of humor and 6’6″ stature; he was a striking physical presence with a thick head of wavy hair and a profile reminiscent of his Viking heritage. He will stand tall in the hearts of all who loved him.

A graveside memorial service, with Military Honors, will be Noon Monday, April 15, 2013 at Coastal Carolina Veterans Cemetery in Jacksonville, NC.