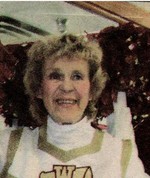 She was born February 19, 1926 in Richmond, IN. She came from New York in 1998. She attended the senior center and became a cheerleader. Their team won the state championship two years in a row. She participated in the Senior Games and won a number of gold medals. She did volunteer work at ILM and the senior center. She was given the President’s Volunteer Service Award 2005, 2007, and 2008.

No funeral per her request. A memorial service will be held Friday, Oct 17 at Glad Tidings Community Church at 5:00 PM for family and close friends.

You will be missed.

Donations can be made in her name to American Red Cross.