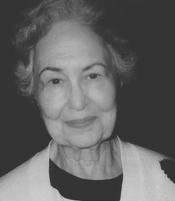 Wilmington, NC — Ruth McMullan Wallin, 95, of Wilmington and formerly of Columbus, Mississippi, died Monday, April 1st, 2013, at her home. She will be buried in her family plot in Friendship Cemetery, Columbus. A memorial service will be held in the fall, at a time to be announced.

Ruth was born in Newton, Mississippi, to Thomas Eugene McMullan and Ruth Hudson McMullan. She graduated from high school in Meridian, Mississippi, shortly after the death of her father, and moved to Columbus with her mother and brother, Thomas Eugene “Gene” McMullan, Jr.

Luther Wallin, Jr., operated Wallin Lumber Company for many years, and later served as president of the National Bank of Commerce in Columbus. He and Ruth were early supporters of wildlife and forest conservation, and active members of the First Baptist Church. Ruth was known for her flower garden, and contributed to her garden club’s “Plant the Town” initiative. Many live oaks and flowering pears in Columbus are the legacy of her group.

Ruth had a special grace, beauty, and dignity. She was a wonderful mother and grandmother, and had many friends.

She is survived by her son, Luther Wallin III, and his wife, Mary Elizabeth Gordon; by Luke’s children Smoke and his wife Anitra, Clay and his wife Sarah, Rain, Patrick and his wife Sheen, and Eva; by Twila’s children, Kimberly and Lisa; by 11 great grandchildren; and by her sister-in-law, Dorothy McMullan Langford, and her daughter Nan.