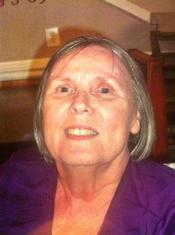 The family will be receiving friends from 6-8 p.m. on Friday, May 24th at Wilmington Funeral Chapel.

Sharon was born in Los Angeles, California to Marvin Richard and Jeanette Lois Butterfield Mallyon on February 15, 1942. The eldest of three, she was the apple of her father’s eye. She was raised in Downey and Lancaster, California. Fond of musicals, singing and children, Sharon dreamed of traveling and becoming a governess one day. She was a graduate of Antelope Valley High School in Lancaster, California.

Meeting her husband Johnnie at the Antelope Valley Skating Rink in 1962, the two were married on November 3, 1963 at Roosevelt Community Church in Lancaster, California. And began their newlywed life together.
They lived their married life between Lancaster and Sacramento, California and Salisbury and Wilmington, North Carolina. In addition to working as a homemaker, Sharon worked for the phone company, Wool-Co, Dorothy’s Ruffled Originals and Walmart.

Sharon’s greatest achievement was about to become her… a mother. Sharon nurtured three children that she adored her entire life. Subsequently, she reaped the joys of becoming a grandmother and a great-grandmother.

Sharon always enjoyed making holidays special for her family, whether she was decorating, singing a carol or baking up a storm. Sharon and Johnnie loved vacationing in the North Carolina mountains after their children were grown.

Sharon is also survived by her beloved sister Claudette Mallyon Silva and husband Philip Silva of Fresno, California and her dearest cousin DeDe and husband Reggie Barnes of Carolina Beach, in addition to many other extended family members, friends and loved ones.