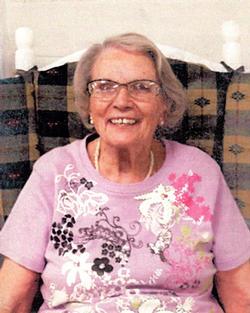 Sophia Mae Burgess Helms completed her homeward journey on March 6, 2014. She was 95 years old. She was born on November 23, 1918 at home at Thompson’s Neck near Southport, NC. She was the eldest child of the late William Henry and Bertie Orilla Evans Burgess.

She was office manager of Greenlawn Memorial Park for 16 years, and 5 years with Oleander Memorial Gardens and Coble Ward-Smith Funeral Service. She worked part-time with James McKeithan accounting firm for several years Patsy Parker Bookkeeping Service retiring at age 75. During WWII she worked at Camp Davis at Holly Ridge in the personnel department. She was in the first class of volunteers with Lower Cape Fear Hospice in 1981, and volunteered until 1988. Since childhood, Sophia was active in many kinds of volunteer work until her hearing became so impaired, communication was difficult. She was woman of the year in 1980 with the USSNC Chapter of ABWA. She enjoyed the many years as an ABWA member. Sophia was active in Mary Martha Sunday School Class and was secretary of the 7-A Audit Department at Winter Park Baptist Church where she was a member for many years. She was baptized at First Baptist Church at 5th and Market Street.

A memorial service will be held at 4 p.m. on Saturday, March 22, 2014 at Wilmington Funeral Chapel.