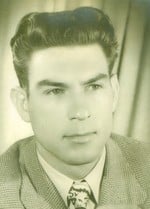 A veteran of the US Army’s 82nd Airborne Division during WWII, he served as a Sergeant in the European Campaign. After being honorably discharged Stacie was in the food and entertainment industry up to his retirement. He was an avid golfer and enjoyed fishing and being with his family.

The family would like to thank the staff at Silver Stream, as well as Dr. Mary Rudyk for all the support shown to the family and the care given to their dad.

A private memorial service will be held at a later date.