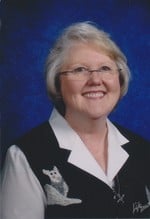 Stacy Dodge Smith of Hampstead went to be with her Heavenly Father on March 10, 2009 after an extended illness. She was born on January 12, 1947 to a family rich in Christian faith and service. She was the daughter of Dr. Henry Haskins Dodge and Emily Katherine Hill Dodge of Chester, Virginia. Stacy is survived by her mother; her husband, Lorenzo Dow Smith (L.D.) of Hampstead; daughters, Emily Katherine Smith Payseur, husband Jonathan Michael Payseur of Chapel Hill, NC and Norma Ann Smith of Greenville, NC. She is also survived by one sister, Emily Katherine Dodge Mansfield and her husband, James Fredrick Mansfield; nephew Captain George Hughes Beckwith, Jr and wife Anna Barrios Beckwith; and nephew Dr. Henry Dodge Beckwith.

Stacy graduated from Longwood University in Farmville, VA in 1969 with a Bachelor of Science degree in Elementary Education. She earned her National Board Certification in Teaching in 2000. She taught in elementary schools in Virginia and North Carolina from 1969 to 2007. She was chosen Teacher of the Year three times during her career and was a finalist for North Carolina Gifted Teacher of the Year in 2004. During her years in Pender County (1975-2007) she taught first, second, and fourth grades, as well as gifted education at North Topsail Elementary, South Topsail Elementary and Rocky Point Primary schools. Stacy was a devoted charter member of the “Society for the Preservation of Sanity”, a group of educators who are more sisters than friends.

Stacy Dodge Smith was a keeper of the light. Its source, her Creator. The light could not be contained, but spilled onto her two beautiful daughters and devoted husband. It radiates from the countless students whose lives she touched. It shines from all those who have been blessed by knowing and loving her. The light still shines.