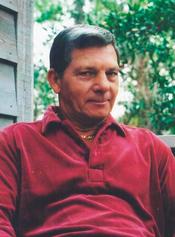 Steve was born in Norwood, NC to Roy B. and Myrtle Stevens Goforth. He grew up in Fayetteville and continued on to Campbell College where he received his BS in Physical Education. Steve was an all around athlete who loved hunting and fishing, but his first love was Golf and he became a Pro. Steve also joined the U.S. Navy and became a Lt. Commander and a pilot. He was later in the Reserves.

He also spent years in the family pest control business and continued on as a manager for Cleggs Pest Control. He enjoyed almost 20 years with Cleggs. Steve’s wonderful sense of humor, good nature and loving attitude were a blessing to all who had the pleasure of working, playing or living with him.

Steve was a kind and loving husband to Frances L. Goforth and he was a devoted father and step-father to their children. He is survived by his two sons, Bryan and Steven and daughter-in-law, Stephanie. He was the proud Grandfather of Aryn Goforth, U.S. Navy. Steve was also the proud step-father of William Brian Kinlaw who is attending the Savannah College of Art and Design; his sister, Kathy Henrickson and husband, Sam; brother, RB Goforth and wife, Carol; his good friend and cousin, Richard Earl Stevens.

A memorial service will be held at 1:00 pm Friday, March 16, 2012 at Oak Island Presbyterian Church by Rev. Walter Taylor.