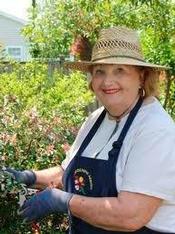 Susan Wheeler Hart 77, of Wilmington the longtime garden columnist for the StarNews, died Monday December 26, 2011 at her Wilmington home, after a battle with cancer.

After a career in marketing and public relations in Great Britain, she immigrated to the United States in 1977, launching her own agency in New York City in 1982. Among her clients were Clairol and Charles of the Ritz.

Hart discovered gardening while living in Bucks County, Pa., according to her friend Karen Root, She specialized in English roses and experimented with vegetables.

In 1994, Hart retired to the Wilmington area, but hardly slowed down. After dabbling in public relations, in 2002 she joined the staff of the Friends School of Wilmington where she worked as a combination secretary, receptionist and marketing director. In her spare time, she edited the school newsletter – and took charge of the school garden.

Hart was naturalized as a U.S. citizen in 1998 in a Charlotte ceremony.

She began contributing garden pieces to Encore magazine in 1998 and switched to the StarNews a few years later. Her freelance pieces also appeared in Parents magazine, Family Circle, Fine Gardening and the former Snows Cut Monthly.