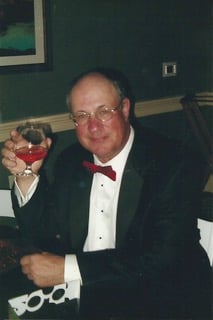 Terry L. Conrad of Leland, NC, died on August 6, 2021, after a long battle with PSP. He was born in Steubenville, Ohio on December 14, 1947. Terry grew up in Cadiz, Ohio. He achieved a Bachelor’s degree from Plymouth State College and a Master’s degree from New Hampshire College.

Terry enlisted in the United States Marine Corp. achieving the rank of Lance Corporal and served with the second battalion first Marine division in Vietnam, active duty from April 7, 1966 to July 19,1967. He was awarded a Purple Heart for injuries sustained during his service.

In his younger years he made his living as a professional potter and was deeply involved in the New Hampshire Potter’s Guild and the League of New Hampshire Craftsman. He then went on to work at New Hampshire College as Director of Alumni Affairs and then ended his career at Salem State University as Vice-President of Institutional Advancement from where he retired to North Carolina.

Although he became an amputee from injuries he sustained from his service in Vietnam, it never stopped him from living his life to the fullest. He learned adaptive skiing and skied competitively in New Hampshire with the New England Healing Sports Association. He came in first place in one of their competitions. He also learned to scuba dive and went on many scuba trips to the Caribbean. His passion was golfing, and he loved to play his home course, Cape Fear National. He was an all around nice guy and would do anything for anybody.

Terry is preceded in death by his parents Iris R. Conrad and Susie J. Conrad (Findling).

The family wishes to extend a special thank you to his home health aide Ms. Ebony Fulton who for the last 2 years has showed nothing but love and caring support for Terry and without whose help would have made this journey so much more difficult.

A Celebration of Life Service will be held at Wilmington Funeral and Cremation on Monday, August 16, with a visiting hour starting at 1:00 p.m., and the service to start at 2:00 p.m.

In the interest of safety, it is kindly requested that masks be worn while inside the funeral home.