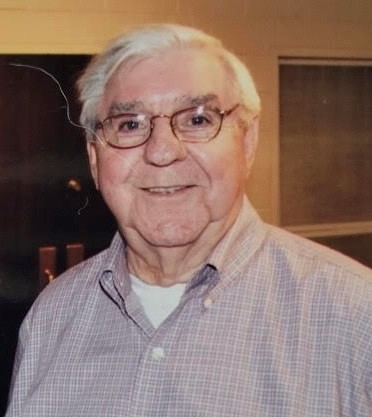 Thelton Jerome “Tex” Lancaster, 89, passed away peacefully on Tuesday, December 14, 2021 with his wife and children by his side.  Tex was born on November 8, 1932 in Southport, NC the day Franklin D. Roosevelt was elected President.  He was the youngest child of four and only son born to Hoyd R. Lancaster and Edith Evelyn Hewett. After graduating from Southport High School, he joined the Army and was stationed in Fort Jackson, Columbia, SC, where he met country musician, Roger Miller and they played in a band together known as “The Lemon Drops”. After serving his country, Tex moved to Wilmington and went to work for WMFD Radio, WWAY and WECT TV Stations.  He became a local celebrity playing in his bands, The Rhythm Range Riders and Hayseed and The Country Cousins, who played live on the morning and evening shows.  They also played at Thalian Hall frequently and all around Southeastern North Carolina.  They were asked to be the opening act for an unknown musician at the time named Elvis Presley in New Bern, NC at the County Fair.  They had to decline due to a live show they were already scheduled to perform.  They also auditioned for the Ed Sullivan Show.  They came in 2nd place.  Tex was a songwriter and one of the songs he wrote was about local legend, Joe Baldwin and the Maco Light.  This recording was played along the Eastern Seaboard.  Another fan of his was a kid named Charlie Daniels who would often ask to play onstage with them.  Charlie was inducted into Wilmington’s Walk of Fame and made sure Tex and his family were at the induction ceremony.

Tex’ career was a chemical operator foreman and he worked for Allied Chemical, Hercules and retired from Pfizer Chemical in 1992.  He was very active in his church, Winter Park Baptist, singing in the choir and in the Keenagers Senior Group.  He was a member of the senior “round table” who met at Hardee’s on weekday mornings for coffee and fellowship.  He made many friends at the NHRMC Heart Rehab Program.  He was very active in his children and grandchildrens’ lives going to their soccer and baseball games and helping out with whatever was needed.

Tex was preceded in death by his sisters, Mildred Martin and Eloise Johansen; brothers-in-law, Alan Zimmerman, Jimmy Fulford, Hilton Jones and Robert Moore.  He is survived by his wife of 60 years, whom he adored, Gloria Fulford Lancaster; his son, Richard Lancaster (Sarah), his daughters, Anita Carlson (Stephen), Stephanie Register (Matthew) and Julie Foard (Grady); Grandchildren, Candice Jones, Benjamin Lancaster, Catherine Lancaster, Holden Carlson, Walker Carlson, Madison Register, Lillian (Lilly) Register and Dylan Register; his sister, Joyce Zimmerman; sisters-in-law, Marybelle Moore, Elouise Jones, brothers-in-law, Donald Martin and Bill Johansen and several nieces, nephews, cousins and a host of friends.  Special mention is made to his care takers, Helen Edwards and Teresa Hicks, who took such loving care of him.  Tex will be remembered for his love of music and he was sometimes referred to as “Guitar Man”.  He could play a mean Steel Guitar.  He will also be remembered for his gentle disposition, sense of humor, quick wit, joke telling and for just being plain funny sometimes.  He loved to make people laugh.  But most of all he will be remembered for his love of the Lord, Jesus Christ, his family, whom he was always present for, his fellow man and being a good friend.  He will be missed tremendously.