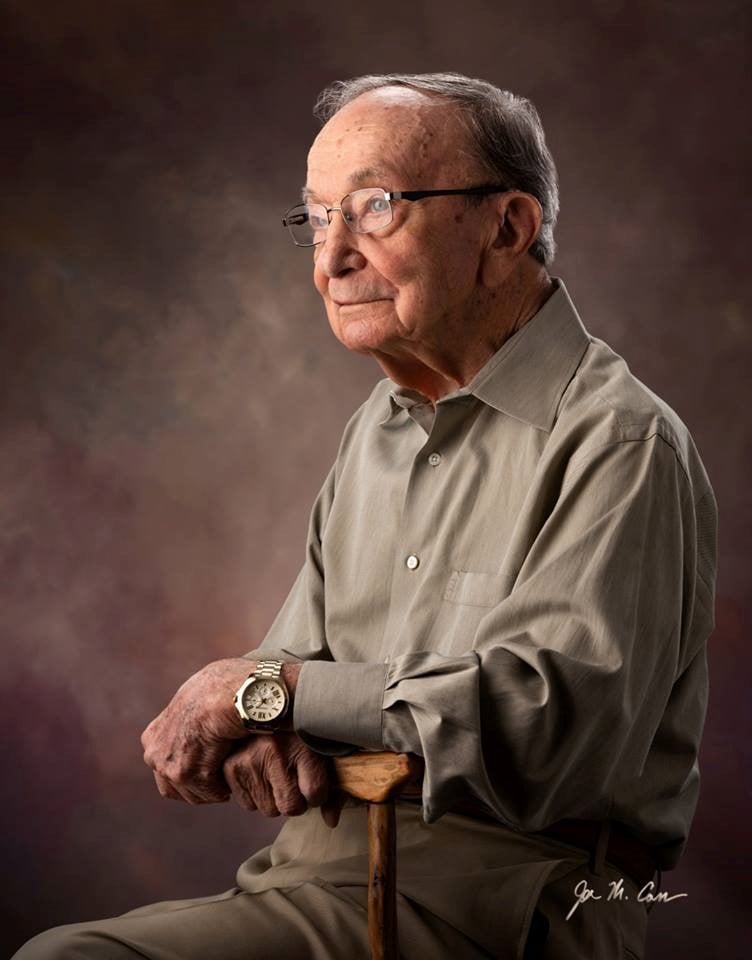 Originally from Paterson, New Jersey, Ted was one of seven children born to Domenico and Frances Rossi. After graduating from high school in Paterson, Ted attended Michigan State University, where he graduated with a BS in Economics and entered active military service in 1943. As a Staff Sergeant/Communications Officer, he underwent a short training period before being shipped to England aboard the RMS Queen Elizabeth and subsequently to Normandy, landing on Utah Beach under heavy fire on D-Day+1. From there he crossed France, assisting in the liberation of Paris, and, as a member of the 18th Calvary Reconnaissance Squadron, fought in the Battle of the Bulge, earning a Silver Star for his extraordinary heroism in that battle.

After the war, Ted met and married Claire, and settled into life in Northern New Jersey, first in Fair Lawn, then in Franklin Lakes. His long career in sales included over thirty-five years in the printing industry, first in Newark where he was a partner in a busy silk screen printing operation, and later in San Francisco, where he and Claire moved in 1978 to “retire.” This first retirement lasted only a few days before Ted joined a Bay-area screen printing company, where he quickly became the top sales generator, working for fourteen years before retiring again and moving to South Carolina at age 74. This second retirement also did not last; before long Ted found a new job in houseware sales at a Myrtle Beach Dow-Corning outlet. After twelve years as a top employee of there, he was recruited by Dillard’s, helping to open the Coastal Grand location, where he continued to work until after his 99th birthday. In 2008, Ted was honored as the Outstanding Older Worker in South Carolina by Experience Works, a national organization that supports senior employees.

Ted was a devoted family man and, as the father of three daughters, was actively involved in their education and extra-curricular activities. He was elected Chairman of the Fair Lawn, New Jersey Zoning and Planning Commission, and volunteered for numerous other community-based organizations. A life-long Democrat, he participated in each national election as a precinct captain, delegate, or campaigner, including working as a captain in the 2008 South Carolina Primary. His interests were many and varied: he was a voracious reader and history buff, loved opera and was a volunteer guide at the San Francisco Opera, played duplicate tournament bridge, and was an avid movie-goer. His appetite was legendary among family and friends, he loved dining out and good food, especially Italian cuisine and ice cream. He traveled extensively throughout the world with Claire, including multiple trips to Italy and other European countries, Hong Kong, Japan, and Thailand. At the age of 90, he journeyed to France with his daughter Sandy and her husband, where he toured Normandy, the D-Day beaches, and World War II memorials, and walked for miles through Paris and Giverny.

Ted will be lovingly remembered for his sense of humor, charm, generosity, and kindness. A familiar sight in Surfside Beach, especially at Malibu, Big Apple Bagels and Hamburger Joe’s, he wore his WWII Vet hat with pride, stopped to chat with everyone, flirted with pretty women, kissed babies, and was a joy to know and love. We will miss him dearly but are blessed to know he is at peace with his beloved Claire.

Information about a memorial service will be posted on the Wilmington Funeral & Crematory website; Ted’s ashes will be interred at Arlington Cemetery when a date and time are available. For those wishing to honor Ted, donations can be made to The Theodore J. Ross Memorial Fund at St. Jude Children’s Research Center or Doctors Without Borders.