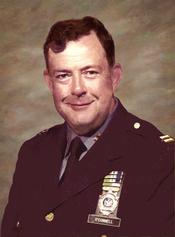 Mr. O’Connell was born in the Bronx, NY and attended Power Memorial HS on a basketball scholarship. He enlisted in the United States Marine Corps during the Korean War, was honorably discharged as a Sergeant and joined the New York City Police Department. He attained the rank of Captain, as did his father before him, receiving numerous commendations, including the Medal of Honor, the highest accolade that the NYPD bestows upon its officers. Two sons and a grandson followed his career path to law enforcement. After retiring from the NYPD, he attended both Hofstra University and Hofstra Law School, became a member of the New York Bar, and practiced law for several years before retiring to Wilmington, North Carolina.

Mr. O’Connell’s retirement years were busy and productive. He was a founding member of the Wilmington 10-13 Club (retired NYPD officers), a Eucharistic Minister at St. Mary’s Roman Catholic Church, an active member of the Marine Corps League (Detachment 1070), and involved in many community and civic activities. He was also an avid golfer and member of the Echo Farms Golf Club.

Mr O’Connell loved God, his country, his family and friends. He was beloved and will be missed by many.

The funeral mass will be conducted 11 AM, July 5, 2012 at St. Mary’s Roman Catholic Church by Father Bob Kus. Interment will follow at Oleander Memorial Gardens with full military honors.

In lieu of flowers, the family would greatly appreciate donations to Step Up For Soldiers, P.O. Box 2003, Carolina Beach, NC 28428.

In lieu of flowers, the family would greatly appreciate donations to Step Up For Soldiers, P.O. Box 2003, Carolina Beach, NC 28428.