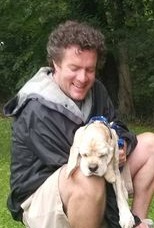 He is survived by his parents, Thomas Sr. and Alice Reardon Casey, formerly of Lawrence, MA. He is also survived by his sister, Alyson Dewar of Winthrop, MA, her husband Duncan and their children Lorelei and Tarquin.

Tommy was born in Methuen, Massachusetts in 1978. He attended St. Patrick’s Elementary School in Lawrence, MA and was a graduate of Lawrence High School, Class of 1996. While at LHS, Tom was involved in many activities including baseball, track, student government and Model U.N. In his senior year he was editor of the yearbook. He received his BA from Santa Clara University in Santa Clara, California in 2000.

Tommy loved adventure. During the summer of 1994, when he was 16, he traveled to Ecuador on an AFS scholarship.
He also loved the outdoors and kayaking. Tom held certifications in wilderness first aid and as a kayak guide in North Carolina. In the summer of 2009 he paddled the Hudson River.

It was a life-long goal of his to walk the Appalachian Trail. He accomplished the 2190 mile hike in the spring and summer of 2011. As a north-bound hiker, he began at Springer Mountain, Ga in February and finished at Katahdin, Maine on Labor Day weekend, just over 6 months after he began. While on the trail he was given the trail name of “Cackle” for reasons obvious to everyone except his mother; if you heard him laugh, he laughed often and loudly. That laugh would identify him forevermore. Along the trail he met many people he would remain close to for the rest of his life, most notably Matt “Moses” Limone and Brian “Shag Daddy” Rollins.

Tom was also an avid photographer; he developed and printed many of his photos in his own dark room. He ran “Calendar Club” and “Go the Game Store” businesses for a number of years. He operated the stores in Maine, Connecticut, New Hampshire, Maryland and North Carolina during that time.

After completing the trail, Tommy returned to Wilmington, NC and purchased his home. In the ensuing years, he worked at a variety of jobs, but never quite found his niche.

Tom was always willing to help anyone who asked him most especially his family. He was always there for us. His kindness and gentleness will be greatly missed by his family and many long time friends.

We love you Tom. May you rest in peace.

Funeral arrangements are incomplete. A service will be held at a later date in Lawrence, MA