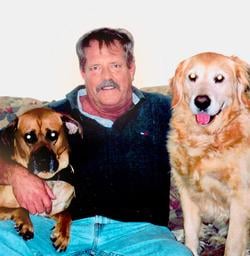 Thomas Simmons “Tom” Lynch died on Sunday, July 13, 2014. His life mate of 15 years, Faith, was by his side. The cause of death was a fabulous life, including 25 years of easy beach living in Wilmington & Wrightsville Beach.

He is survived by his siblings; John, Logan, & Sallie; his in-laws, Annette, Marsden and Carter; his nieces and nephews; Caroline & John, Jack & Cate, Simmons, Marsden & Kendall, Liz & Jason, Carter, & Will; Katelyn and Justin; his great nieces & nephews; Parker, Molly, Campbell, Lilly, Ian, Falon, Geneva and Piper; his Uncle Billy; his first wife Cathy; and his dog Zeus. Tom loved and enjoyed every one of them. Several of them have picked up Tom’s unique southern drawl.

Although Tom was a career salesman in hardwoods, floor coverings, and real estate; he was not a man who focused on academic and career accomplishments. An honest and principled life, along with some Rocky Mount sausage & a few beers, was just fine.

His passions were fishing, hunting, golfing, a little poker, and having fun with his dear friends. Tom hated hypocrites and UNC, not necessarily in that order. Tom was funny, truthful, self-depreciating, straight to the point, and likeable.

Tom’s trademark was his sense of humor & sense of conservatism. He deftly wielded them throughout his infamous toasts at weddings and parties. An example was at his dad’s second wedding, when Tom told the wedding party that you would think a couple with 144 years of life experience would have enough sense not to get married. He then warned the participants at this Episcopal event to be careful when choosing between sipping, dipping, & knee walking. Tom finished up by advising them that he was consistently “right” and although occasionally supporting moderates like Jesse, Strom, & Rush he was basically conservative.

Everyone who remembers him is asked to celebrate Tom’s life in their own way. Instead of flowers, Tom would hope that you will do a clever unexpected and unsolicited act of kindness to someone in his name or just tell a “Tom” story. Tom will be cremated and the destination of his ashes will be left to your imagination.