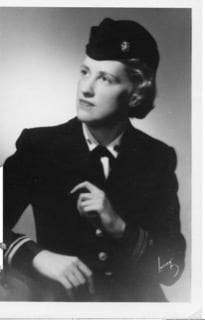 Violetta J. “Kelly” Wainio, age 93 passed away on March 20, 2018. Kelly was born in Pottsville, PA and spent her childhood in Reading, PA.

She joined the Navy as a registered nurse in 1950 and served as a Lieutenant during the Korean War. While at her duty station in the Panama Canal Zone, she met and married Fredrick James “Jimmy” Wainio where they had an incredible life and 3 children.  Kelly was the Elementary School nurse in the mornings and the Well Baby Clinic nurse in the afternoons as she helped to raise all of the children in the Margarita community. Jimmy passed away in 1976 and shortly thereafter the family moved back to the U.S. She spent time in Dothan, AL, Gretna, LA, and moved to Wilmington in 1986 to be near her daughters and grandchildren.

Kelly loved children, shopping, cooking, entertaining, and her family. Those who knew her admired her taste in unique furniture and collectibles and her will to shop till you drop. She lived with her daughter Jody for nearly 5 years until November of 2016 when she moved to Davis Nursing Home.

Kelly is survived by her daughters Beth Deaton (husband Ted Deaton) and Jody Wainio of Wilmington, and her son Fred Wainio (Wife Diane Wainio) of Ponte Vedra Beach, FL. 6 Grandchildren –  Lisa Deaton Verstandig, Neal Deaton, Lori Deaton Nichols, Heather Wainio, Ashley Wainio, Freddy Wainio and 4 Great Grandchildren. She is also survived by her sisters Mary Ann Yoder and husband Richard of Lady Lake, FL. and Peggy Janiszewski and her husband John of Reading, PA. Kelly was the last of her generation of Wainio’s, leaving many nieces and nephews proud to call her their aunt. She will forever be The Lieutenant of the family.

A memorial service will be held for family and close friends at a later time. In lieu of flowers the family requests donations to be made to the Lower Cape Fear Hospice.