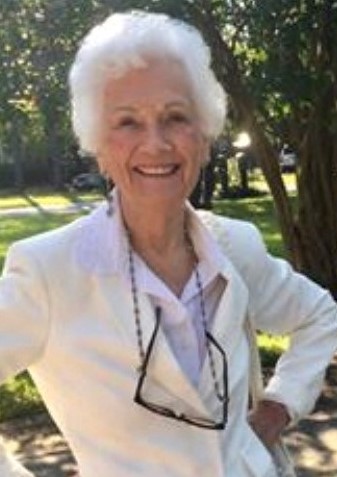 Vivian Fisher Gardner of Wilmington was called home by our Lord and Savior on June 7, 2019.

Vivian was born in Salisbury, NC to Martha and James Fisher on November 4, 1928.

Surviving are her beloved son and caretaker, Rick Gardner, wife Polly, and beloved only daughter, Karen Gardner, five grandchildren she adored, Melanie Gardner, Hal Gardner (Colleen), Melisa Dudinski (Andrew), Steven Gardner, Melodye Bridges and five great grandchildren, Lindsey Gardner (whom she loved better than Peter loved the Lord, as she would tell her), McKenna and Riley Gardner, Sebastian Dudinski and one on the way.

Vivian moved to Carolina Beach with her family as a teen and graduated from New Hanover High School in 1946. She met her husband Henry while he was working in the soda shop on the boardwalk and they married in December 1947. They built a home in Wilmington where they lived for 57 years.

She began a career in insurance and banking, and then went to work in real estate. She was one of the first women to open her own firm, Century 21 Gardner and Associates in 1975 (which became C-21 Brock Mills). She was a mentor to many still practicing real estate today. She was President of the Wilmington Board of Realtors in 1994 and held many positions on boards and organizations in real estate over the years.

Vivian was an exceptional woman that could light up a room with her smile and never met a stranger. She was involved in many clubs and organizations throughout her life but the one dearest to her was ABWA (the American Business Women’s Association) where she was the national President in 1973. She served as President of four local chapters, was voted Top 10 Business Women of ABWA nationally in 1978 and in 1998 traveled with a delegation of ABWA National Officers and Top Ten Business Women to China as guest of Chinese Women of Science and Technology. ABWA took her all over the country and she met so many lifelong friends by attending annual meetings and conferences for 60 years. She was also involved in Woman in Insurance, Woman in Real Estate, NC Sorosis and the Cape Fear Garden Club.

She was a member of Oak Grove Presbyterian Church for over 50 years and was a Sunday School Teacher, Choir Member, Deacon and the first female Elder.

Vivian loved her Lord, family and church more than anything. She enjoyed traveling, recruiting members to the various clubs and organizations she was involved in, scrap booking, gardening and making her family laugh with her funny sayings that they will never forget, and repeat often.

The family would like to thank her caretaker of the past three years, Debbie, and the Lower Cape Fear Hospice.

Services will be officiated by McLean Faw at Oak Grove Presbyterian Church on Carolina Beach Road Monday, June 10th at 2:00 pm with burial following at Green Lawn Memorial Cemetery. Visitation will be held one hour prior to the service.

In lieu of flowers, donations may be made to the NC Sorosis, Cape Fear Garden Club or the Lower Cape Fear Hospice Center.