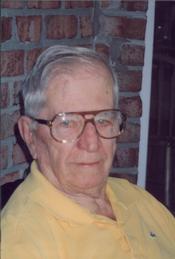 Known as Jack to his family and friends, Walter S. Frost III died on January 6, 2012 at Lower Caper Fear Hospice and LifeCareCenter.

He attended high school at Mt. Herman and graduated from the University of Vermont with a degree in Journalism. Jack was a long time resident of the Wilmington/Leland area. Through the years, he volunteered with the Coast Guard Auxiliary, Meals on Wheels, Senior Net, and the International Seaman’s Center. He loved to sail and spent many happy summers on Cape Cod. An avid golfer, he enjoyed many rounds with friends at the Pine Valley Country Club.

During World War II, Jack proudly served his country with the 13th Airborne unit of the United States Army. He also served during the Korean War. In later years, Jack was active in the 13th Airborne Association, serving as editor of their quarterly magazine in addition to his year as Association president.

He worked 26 years on the copy desk of the sports department of the Boston Globe until his retirement in 1989. Jack was an accomplished photographer and also wrote the Camera Column of the Sunday Globe.

Jack is survived by his wife, Mary Anne and five of his children: daughter Linda Murphy and her husband John of Scituate, MA, son James Frost and his wife Marita Boyle of Marshfield, MA, son Daniel Frost and his wife Lesley of Bear, Delaware, daughter Sally McCarthy and husband Thomas of Marshfield, MA and son Scott Frost and wife Carolyn of Naples, Fl. Jack was also a proud grandfather of 14 and great-grandfather of five.
He is pre-deceased by his daughter Deborah.

In lieu of flowers, memorials may be made to Lower Cape Fear Hospice, 1414 Physicians Dr. Wilmington, NC 28401, or to the charity of one’s choice.