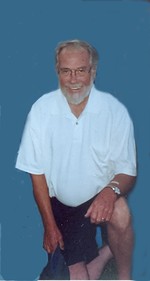 He was a Navy veteran serving in the Korean War. Wally loved golf, fishing and reading.