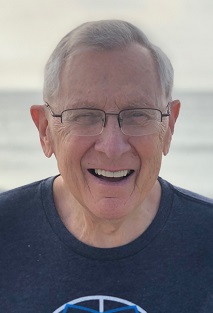 He was born in Bloxom, VA, on October 10, 1940, the son of the late Walter Ward and Amanda Barnes Ewell.

He is survived by his two beloved daughters and their families, Chelsea, Jason and Cole Thornhill; and Clair Ewell and Zander Barnes McCabe, all of Wilmington. He is also survived by his three sisters, Angela Benton, Theresa Lewis, and Andrea Mason, all of Parksley, VA.

He graduated from Hargrave Military Academy in 1959 and received a B.S. in Marketing and Advertising from Virginia Commonwealth University. He returned to college in the late 1990’s to get a M.Ed. from Salisbury University. He took this new degree overseas, lecturing in English in Dalian and Lushun, China, and teaching communications workshops in Bangkok, Thailand. When he returned to the U.S. he moved to Wilmington, NC, to share the lives of his daughters and grandsons. Wayne was devoted to family, they were his world. Wayne was not a material man – he preferred the simple things in life.

Wayne enjoyed many other things – a love of biking (his motto was “use it or lose it), watching football, connecting with family and friends near and far over the internet, taking photos (a conservative estimate of his collection is in the thousands), and visiting his old haunts on the Eastern Shore of Virginia (Oh, if they could talk!). Playing games with his grandsons and lending his girls a helping hand rounded out things for Wayne.

His generosity with gifts and his time are fondly remembered by family and friends, along with his love of making others laugh, even if it was at his own expense. He was given the title of “the best playmate” by good friends and remembered for his willingness to “give you the shirt off his back.”

A Memorial Service will be held to celebrate Wayne on the Shore at a later date.

If you wish you may remember Wayne with a donation to A Bike For Every Child (abikeforeverychild.org), a local nonprofit in Wilmington.