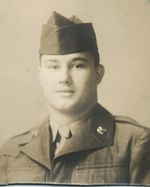 Willard Perry Barrow, age 76, of Kinston, NC died peacefully Saturday January 12, 2008 at the home of his daughter in Oak Island, North Carolina, near the waterway where he loved to sit and watch the birds and sailboats.

Born to the late James and Virginia Inez Wade Barrow, he retired from the US Air Force in 1968 after 20 years of service and inclusive of 2 tours of duty in the Republic of Vietnam. He, then, established Barrow’s Appliance Service which he operated until 2004. During this time he never charged the down-trodden or poor, the unhealthy, the struggling single parent or anyone else in need.

A memorial service with Pastor Vernon Adams officiating will be held at Wheat Swamp Christian Church, 3732 Wheat Swamp Road in La Grange, NC, on Wednesday, Janaury 16, 2008 at 2:00 p.m. with visitation at the church immediately following the service.

It is requested that donations be made to research foundations specializing in Parkinson’s Disease and Diabetes or to a charity of one’s choice.

Heartfelt thanks to Community Home Care & Hospice of Leland, NC and Coastal Companion Care of Southport and all others who supported our father during his illness.