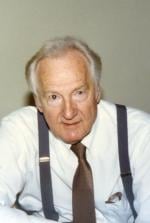 Bill was born July 23, 1910 in Baltimore, Maryland to the late Jacob and Viola Leon.

He is survived by his long-time sweetheart Margaret Helen (Breyer) Leon, having been married for 80 beautiful years. Also survived are his two daughters, Gail Leon of Brevard, NC and Gloria Leon Kidd (Reg) of Leland, NC.

Bill was an amazing man who conquered life while dealing with blindness from birth. He became a successful businessman. Even though Bill was legally blind his hobby of photography opened up doors of sight for him and he never lost hope of improving upon his limits. He was a gentle, kind, and soft spoken man who set example to many that adversity should never limit your desire to achieve.

In lieu of flowers donations can be made to your favorite charity or The Lower Cape Fear Hospice 1414 Physicians Drive, Wilmington, NC 28401