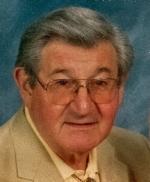 He was born in Pittsburgh, PA February 13, 1929, the son of William John Maus Sr. and Ida Renckley, who, along with his sister Marilyn Cook, preceded him.

He was a graduate of Central Catholic High School and the University of Pittsburgh, and then was awarded a full basketball scholarship to St. Francis College in Loretto, PA, graduating with a B.S in Accounting. While at St. Francis, he met his future bride, Patricia Ann Burley. They married April 22, 1950, and moved to Pittsburgh, where they began their family of nine children.

Following graduation from college, he became a CPA and worked in Pittsburgh until 1959, then took a position of Treasurer at Season-All in Indiana, PA. Seven years later, he accepted the position of Controller at LORD Corporation in Erie, PA where he spent the remainder of his career, retiring after 25 years. He excelled at LORD, and rose to the position of Vice President and Chief Financial Officer. While at LORD, he commuted to Case Western Reserve in Cleveland and earned his Masters of Business Administration.

Maus was known for his leadership and selfless involvement in activities besides his family and his career. He was a long-time member of the National Association of Accountants, the American and Pennsylvania Institutes of Certified Public Accountants (Past President of the Pennsylvania state society of CPA’s), and served as in various leadership positions at national, regional, and local levels of the Institute of Management and the Financial Executive Institute. He was a teacher of Finance and Economics in the MBA program at Gannon University in Erie, PA for several years.

Bill was a friend, mentor, and advisor to countless people during his life, and will be remembered for his generosity and tireless dedication to others in the community. He was on the Corporate Boards of PennBank, the Public School Authority of Erie, PA, Board Member at WQLN public radio, and was a catalyst in the founding of an organization serving the mentally handicapped in Erie, PA known as “LaArche”, which continues to provide community service and support.

During his retirement, he remained active in financial consulting to private individuals and to his dear friend and brother-in-law John Burley’s business in Houston, TX. He also served in many committee and Board roles at Plantation Village in Wilmington, NC, including as VP of Council Finance Committee and as an Area President.

Maus was a very devout and dedicated believer in his faith, and served as a Eucharistic Minister at several Roman Catholic churches, and most recently an active member of the St. Mark Catholic Church Parish Council Finance Committee in Wilmington, NC.

An avid Steelers fan, he instilled a love of sports, camaraderie, and a joy for life in each of his children and many friends. He played basketball into his 60’s, and loved to golf with his sons at yearly outings, and play tennis with his daughters.