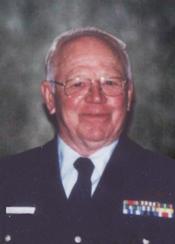 Bill was a native of South Jersey. He was born at Cooper Hospital in Camden, NJ, on February 5, 1929 to the late William and Pearl Knoll, and attended and graduated Atco Elementary School in Atco, NJ and Lower Camden County Regional H.S. in Stratford, NJ, where he was active on the cheerleading
squad. After graduating high school, Bill proudly served his country as a Machinists Mate for two years in the U.S. Navy aboard the U.S.S. Greenwood, a Destroyer Escort. Upon an honorable Navy discharge in 1948, Bill met Rita DiPietro at the Watsontown Skating Rink in 1949 and two years later they were married at the Atco Presbyterian Church in Atco, NJ on February 17, 1951.

Bill and Rita settled in Berlin, NJ where they eventually became the proud parents of three daughters, Cheryl McDowell, Linda Geisel, and Billie-Jo Knoll, and a very loving grandfather to five grandchildren, Tara Geisel, Christopher Geisel,James McDowell, Lauren Kostovick, and Colleen McDowell. In addition to his wife and daughters, Bill is survived by one sister, Jean Vernam of Lawrenceville, NJ, and Donald Knoll of Atco, NJ. He is preceded in death by three brothers, George Knoll, Howard Knoll, and James Knoll.

Mr. Knoll worked as a Materials and Corrosion Engineer for Allied Chemical in Camden, NJ from 1955 to 1973, transferring to Morristown, NJ from 1973 to 1990 when he retired. Bill was an active member of the Loyal Order of Moose and Trustee of the Alpha Gun Club of Atco, NJ from 1946-1973. Always outgoing and friendly, he never missed a chance to attend someone’s special party or event. Two of his favorite hobbies
were golf and woodworking. Over the years he designed and built quite a few items for family and friends, everything from birdhouses to kitchen cabinets. Bill gave his family the priceless gift of wonderful memories by hosting family barbecues and holidays, and taking the family on wonderful summer vacations
all up and down the East Coast. He taught his daughters, grandsons, and granddaughters a little about gardening, fishing and camping along the way. Bill lived by the golden rule to always try to treat others as he would want to be treated.

Upon retirement, Bill and Rita moved to Wilmington, NC to spend their retirement years enjoying the warm sunshine and
southern hospitality. True to his friendly, social nature, when he was settled in Wilmington Bill joined the Coast Guard Auxiliary
10-01 in Wrightsville Beach and served as Commander in 2001.

Funeral service with full military honors will be conducted 3:00 PM Wednesday September 26, 2012 at Wilmington Funeral Chapel. Burial will be private. The family will see friends from 2 PM until service time.

The family would like to express their sincere thanks to Dr. Warhaftig, and to all the nurses and doctors at Lower Cape Fear Hospice and Autumn Care of Myrtle Grove for all their kindness and care in helping Bill to pass peacefully from this life to the next.